Lung ta (horizontal) prayer flags are of square or rectangular shape, and are connected along their top edges to a long string or thread.  They are commonly hung on a diagonal line from high to low between two objects (e.g., a rock and the top of a pole) in high places such as the tops of temples, monasteries, stupas, and mountain passes.  The students and staff have renewed the prayer flags at the winter school for Losar. 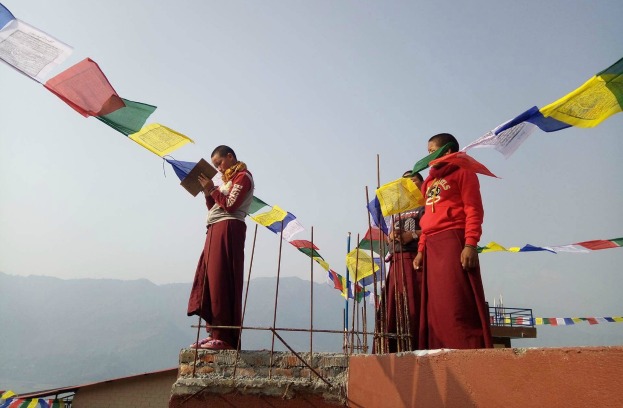 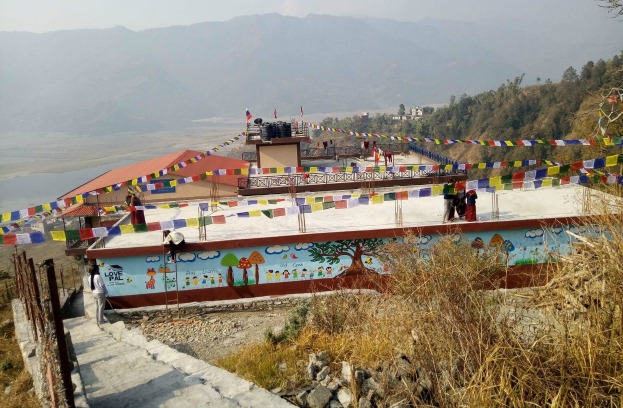 The centre of a prayer flag traditionally features a Lung ta, a powerful or strong horse, bearing three flaming jewels on its back. 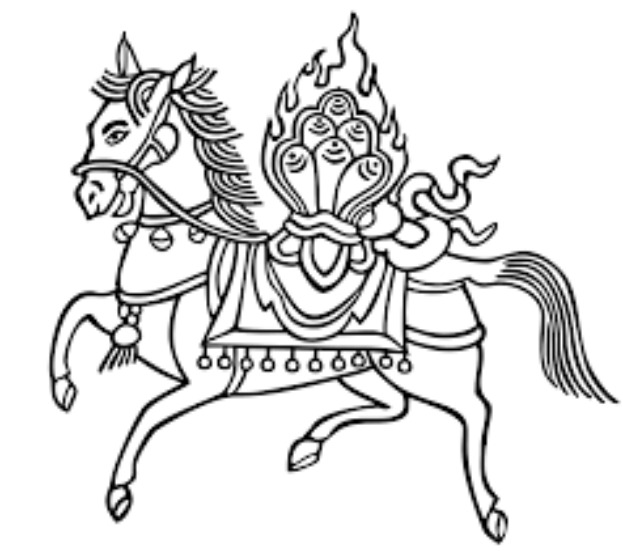 The Ta is a symbol of speed and the transformation of bad fortune to good fortune.  The three flaming jewels symbolize the Buddha, the Dharma (Buddhist teachings), and the Sangha (Buddhist community): the three cornerstones of Tibetan philosophical tradition.

Surrounding the Lung ta are various versions of approximately 400 traditional mantras (sacred chants or sounds), each dedicated to a particular Buddhist deity. 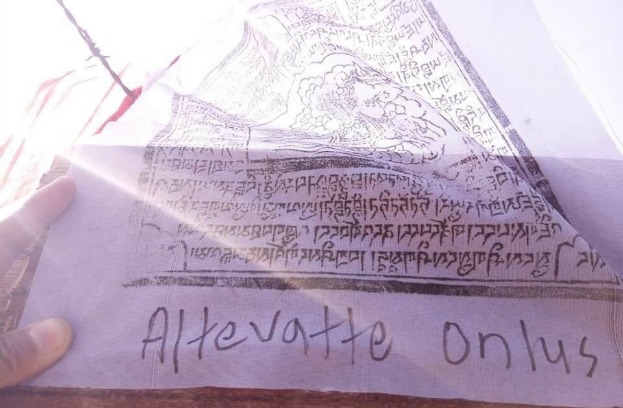 Special messages or dedications are often written on the flags 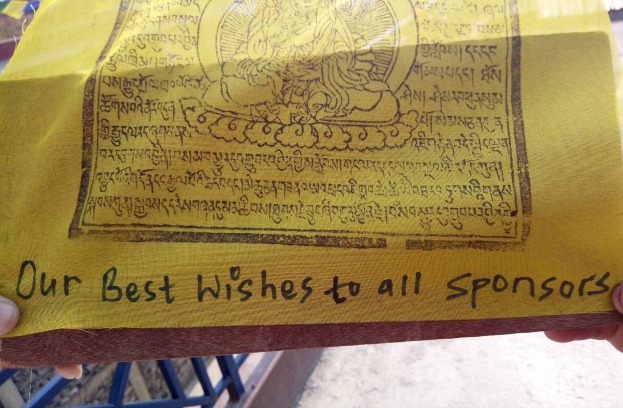 Traditionally, prayer flags are used to promote peace, compassion, strength, and wisdom. The flags do not carry prayers to gods, which is a common misconception; rather, Tibetans believe the prayers and mantras will be blown by the wind to spread the good will and compassion into all-pervading space.  In this way, prayer flags are thought to bring benefit to all.

The flags are hung in high places so the Lung ta will carry the blessings depicted on the flags to all beings.  As wind passes over the surface of the flags, which are sensitive to the slightest movement of the wind, the air is said to be purified and sanctified by the mantras. 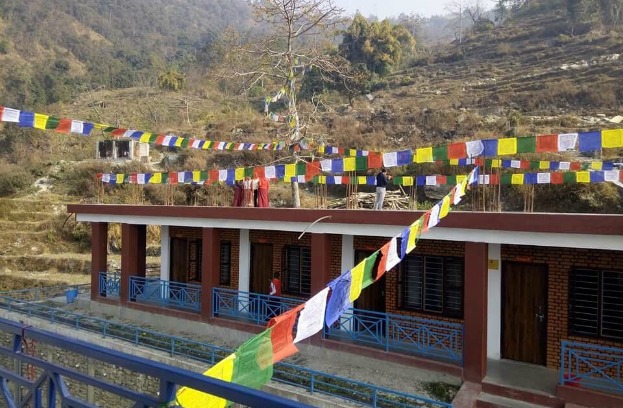 The prayers of a flag become a permanent part of the universe as the images fade from exposure to the elements.  Just as life moves on and is replaced by new life, Tibetans renew their hopes for the world by continually mounting new flags alongside the old.  This act symbolizes a welcoming of life’s changes and an acknowledgment that all beings are part of a greater ongoing cycle.

Everyone is having fun at Losar and relaxing after exams. 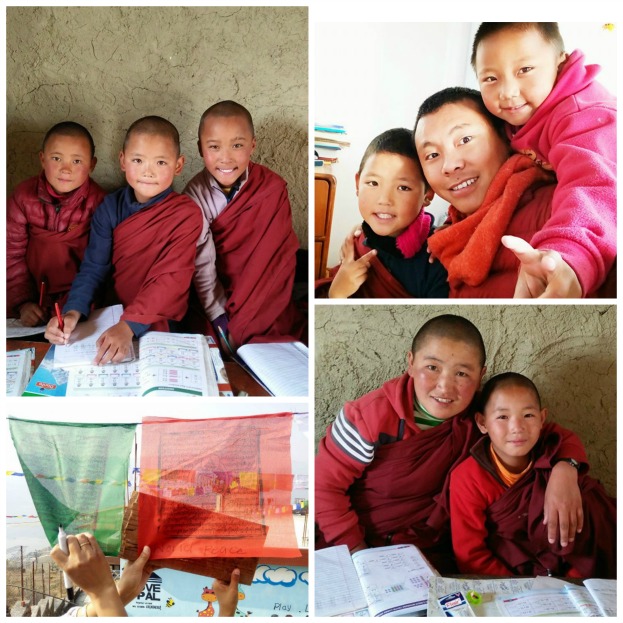 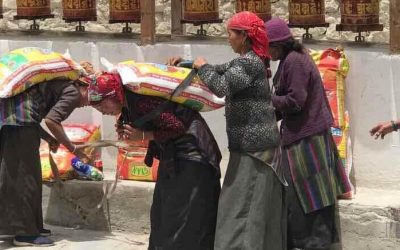 Lessons can begin again Hello everybody, apologies for the delay in writing the latest newsletter.  It’s been a challenging few months for everyone.  During lockdown many girls stayed at the school as usual as they have no families to go to or live too far away and so... 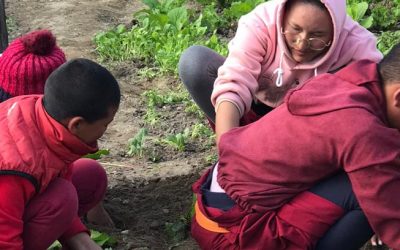 Our children learn about caring for others

Our Children Learn Important Life Skills After such a long absence of news, (slight) apologies for sending newsletters 2 weeks running.  There's news and more photos to share and some important information to update and clarify last week's fundraiser... 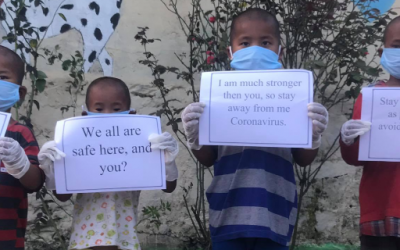 The school in the evening light Sparse news in lock down Communications are obviously more challenging during the lock down period and news is less frequent.  After nearly 4 months with travel restrictions in place, we're happy though to share that some children from...

To receive updates on our news, please subscribe to our occassional newsletter.